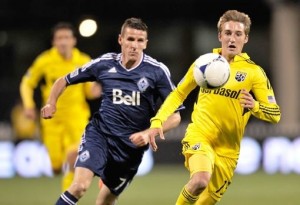 Imagine a soccer game where you complete almost 80% of your 501 passes (I did not know that they keep track of such things), control the ball 62.8% of the time, have 9 corner kicks versus only 2 for your opponent, taking 14 shots on goal versus your opponent’s 9 shots and, oh yes, you also have two goals that are “disallowed.” Welcome to the Columbus Crew’s loss on Saturday evening, April 26th, against the visiting Vancouver Whitecaps at Crew Stadium in Columbus, Ohio. Soccer players are used to working very hard over the span of a 90 minute game, and they seem to understand quite well that they play a sport where statistics are difficult to correlate with wins and losses. Goals are the only thing that matter, not how far a player ran (another stat that I didn’t know is tracked) or how much they “controlled” the game in other ways. The Crew played the best game I have seen them play this year and the coaches are to be congratulated for devising a strategy that put the team in a position during the course of the game to score often. It just didn’t happen. In football, basketball, and baseball, statistical domination does have some significant correlation with wins and losses. This is just not so in soccer and perhaps why soccer may be more of art form rather than just another sport. This was certainly a beautiful and creative game to watch (since I now know they completed almost 80% of their passes!) and one of the players I spoke with afterward said outplaying a team and losing is part of life in the soccer world.

In 2006 Rita and I found ourselves at the World Cup Final in Berlin where Italy played France for the championship. After 90 minutes of regular play and 30 minutes of “extra time” the game came down to a shootout. Being an American who thinks he knows something about sports, this way of settling such an important and prestigious soccer match was downright wrongheaded. We were surrounded by individuals from many different countries and when it became clear that a shootout was going to be utilized to settle the match, I observed nothing other than excitement and enthusiasm for what was about to take place. The fans got caught up completely in the drama of the moment. I turned and asked a gentleman from Germany seated next to me if he thought that this was an appropriate way to settle a game of such magnitude and he, without hesitation, said absolutely yes and he then turned his focus (and vocal chords) to the task at hand. That World Cup in Germany demonstrated to me Western Europe’s grip on global soccer. Western Europe has about 400 million people (6% of the world’s population), yet only once in the entire World Cup in 2006 did a western European team lose to a team from another region (Switzerland lost to the Ukraine on penalties). Mexico, Japan, the United States, and Poland could not match the small little western European countries like Portugal, Holland, or Sweden.

The fans of the Columbus Crew are some of the very best in Major League Soccer (MLS) and are to be commended for coming out to a game that was played in rather damp and cold conditions. The team, the fans, and the supporter’s groups including the Crew Union (a supporter group that concentrates on supporters from outside of the Columbus area), the Hudson Street Hooligans (the largest supporter group that includes at least 780 members), and La Turbina Amarilla (meaning “The Yellow Turbine”) are all to be commended and thanked for their continued support of the team. Before the game I was able to participate in a round table discussion with Crew season ticket holders who live outside of the Columbus area. It was very informative and I know the staff of the team really appreciated the feedback. The Crew wants the fans to have the very best possible experience at all the home games. My wife and I were also able to visit many of the suites before and during the game and met many wonderful supporters of the Crew. One of the most interesting suites we went to was hosting players, parents, and coaches of the  United States Deaf Soccer teams that had played earlier in the day at Crew Stadium in the rain and sleet. In meeting with these folks, were we amazed at their enthusiasm and thankfulness for the games they got to participate in earlier that day. What an asset for the community that the Crew was able to host such event at Crew Stadium. One of the parents of a player said she thought there were at least 750 people in attendance at the games. Now that is genuine community outreach!

On the topic of attendance and overall community support, I think the Crew is a well-kept secret in the Columbus area.  I’d love to see the community fully embrace this franchise. Professional soccer is a fantastic entertainment value. The franchise has been in Columbus, Ohio for what is now its 17th season, is a charter franchise of the MLS, and plays in the first soccer-specific stadium built in the United States. However, it seems that many have taken this franchise for granted. MLS continues to grow and, on a game-by-game basis, has surpassed the average attendance for NHL and NBA games. It is the world’s sport. The Crew is working to sell 10,000 season tickets and procure a naming rights sponsor for Crew Stadium. They have already achieved an earlier goal of procuring a sponsor for the front of their jersey (thank you BARBASOL!). Momentum is gaining with other key sponsors and my hope is that perhaps when folks have a little bit more free time during the summer, they will come out and pack Crew Stadium for home games this summer. What a great way to spend a summer evening.

Incidentally since I mentioned the western European dominance of the matches at the 2006 World Cup, I should also mention that some of the most avid spectators for soccer in western Europe can be found in the Scottish Premiere League where in a country of only 5.1 million people, the soccer matches drew an average of 15,580 spectators per game in 2007-2008. Ohio has only one professional soccer team and over 8 million people. Let’s pack Crew Stadium this summer. Dare to be Massive!