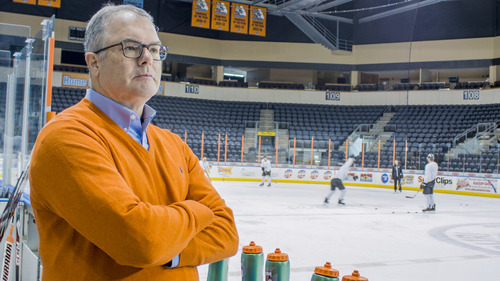 Kansas City Mavericks owner Lamar Hunt, Jr. and general manager Brent Thiessen announced on Thursday that the club will become the ECHL affiliate of the NHL’s Calgary Flames and AHL’s Stockton Heat beginning with the 2017-18 season.

Kansas City Mavericks owner Lamar Hunt, Jr. and general manager Brent Thiessen announced on Thursday that the club will become the ECHL affiliate of the NHL’s Calgary Flames and A HL’s Stockton Heat beginning with the 2017-18 season.

“First, I want to thank the New York Islanders, and last year the St. Louis Blues, for allowing us to affiliate with them over the past couple of seasons,” said Hunt. “After having an opportunity to talk to several different NHL/AHL teams, we welcome the Calgary Flames and the Stockton Heat as our new affiliate for the 2017-18 season with a series of one-year contracts. We believe the Flames organization, while wanting us to help them develop players for future play at the AHL and NHL levels, also understands our need to be consistently competitive in the ECHL. We believe this is the most balanced approach for the Mavericks to win the Kelly Cup, have year-to-year continuity within our roster, and bring to Kansas City talented and young aspiring hockey players.”

The affiliation with the Flames organization is a year-to-year agreement, renewable at the end of the upcoming season.

The Mavericks will be replacing the Adirondack Thunder in working with the Flames. A total of six Calgary prospects spent time with Adirondack in 2016-17, including four during the Kelly Cup Playoffs.

“We wanted to move to an organization that we know that we will have a great relationship with, that understands what we are trying to accomplish, and one that we believe we can commmunicate and work well with,” said Thiessen. “We’re very happy to say that we’re now with the Calgary Flames. It’s a very successful organization and a very storied franchise. We’re lucky to be working with a first class organization such as them.”

The Mavericks had been affiliated with the New York Islanders and the AHL’s Bridgeport Sound Tigers since the 2015-16 season. Prior to that partnership, the Mavericks worked with the AHL’s Chicago Wolves from 2011-12 through 2014-15. Kansas City also had a working agreement with the St. Louis Blues for the 2016-17 campaign while remaining the official affiliate of the Islanders.

“The Calgary Flames are pleased to have reached an affiliate agreement with the East Coast Hockey League’s Kansas City Mavericks,” said Calgary Flames assistant general manager Brad Pascall. “Our organization was seeking a first class franchise with quality ownership and management that share the same principles and objectives for player development philosophy as our own club and we found a great fit with the owner Lamar Hunt, Jr. and general manager Brent Thiessen and the KC Mavericks.”

The Mavericks begin their 2017-18 season on the road with a Friday, Oct. 13 date against the Tulsa Oilers, and will open their home slate on October 28 at 7:05 p.m. against the Wichita Thunder. Season tickets for the 2017-18 campaign are on sale now.